Jump the Abyss was one of several projects submitted for the 2018 Austin Community College game jam. The theme was gravity, and we instantly thought to create a game where the main character is affected by it.

Unfortunately, the original version of this project wasn't playable past the first level. I've gone back over everything, fixed errors, and created 2 additional levels. We will  not be finishing this project.

Roy, who served largely as Lead Designer during the conceptual stage, who created the planets, and assisted greatly by creating the main menu. He was a good leader for the art, and he was happy to listen to and discuss any technical concerns that arose.

Ben, the quiet workhorse. He tackled the art so hard Roy was freed up for other tasks. He also helped with level design.

Melanie, who created the backgrounds. Unfortunately, she was unable to complete the jam with us.

Gabe, who conceptualized and designed our main character, O'Ryan, and the Space Princess.

Finally, Andrew (myself): I was the Technical Lead and Level Designer. I'm not a programmer by training, and it's painfully clear a real programmer would have done much better. This project was an opportunity to embrace a non-Designer role, and I appreciate how much I still have left to learn. 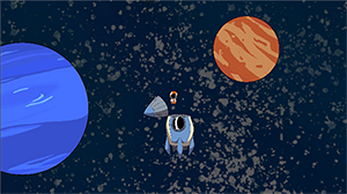